Knights and their Towers 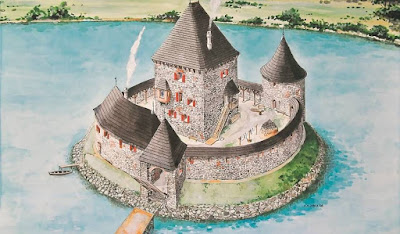 Knight's towers were fortified self-standing buildings, several-stories high, most often erected on a plan similar to a square. They contained both living and utility spaces. They were also a way to bypass a law. In the Middle Ages, special permission of the sovereign was needed for the construction of a castle. Clever people got around this ban by building so-called knights' towers.

A fortified residence was needed not only to defend a knight's family. It stressed the feudal power over his subjects. To live in a magnificent citadel, towering over the area, was emphasizing the knight's social status and clearly distinguished him – not only from the peasants – but also the minor knighthood. Stone walls, earth embankments or even a wooden palisade forming a closed circuit around the building, marked a sacred and inviolable place of residence of a noble (or not) knight.

Who were the inhabitants of the knights' towers? Most famous were the men who had the reputation of Raubritters, knight-robbers, adventurers, and tyrants. Hence, it is no coincidence that they often chose for their headquarters a place located near a busy trade route, or right next to a convenient river crossing...

Each tower is ruled by a knight, usually a self-styled baron. Each knight has a number of lieutenants and many unarmed servants.

What's your deal, Knight?
1. Knight Diplomat forged numerous alliances with his neighbors. If he's threatened, a small army (3d6 lieutenants) will arrive in 2d4 days to defend him.
2. Drunken Knight's tower houses a famous brewery and a popular inn. There are large transports of booze coming out of the tower weekly in various directions.
3. Knight Torturer is a vampire who rides a giant bat into battle. His men are mindless thralls who always succeed their morale checks. The dungeon under his tower is filled with captured victims and their corpses.
4. Zealot Knight is a paladin and his lieutenants are clerics. His tower houses a cathedral, under which there's an ancient crypt. The knight believes the crypt's lowest level houses the Ordained Vessel he's destined to recover for his church.
5. Sage Knight is a wizard, each of his lieutenants has a 50% chance of being a magic user as well. He's also a skilled diviner and will be able to predict in advance whether someone threatens his tower. The tower itself houses a voluminous library, however, the knight diligently guards it and gives access to it only to those he trusts.
6. Barbarian Knight comes from a faraway land. His sheer heroic deeds inspired brave warriors to follow him. He's armed with a vorpal greatsword and seeks glory above all else.
7. Rat Knight is a wererat as are all his lieutenants and soldiers. This particular wererat variant is more like Thundarr's groundlings mixed with Warhammer's skaven, than the shapeshifting D&D wererats. One day Rat Knight and his minions emerged from a secret underground passage and devoured the previous inhabitants of the tower. Nowadays it's known as the infamous Rat Tower and is rumored to be protected by a multitude of deadly traps, as well as housing a subterranean temple dedicated to Vexarus.
8. Necromancer Knight's lieutenants are all undead and his military units consist of zombies and skeletons. His ultimate goal is lichdom. All living things deserted his lands a long time ago. He ambushes travelers passing through his territory to grow his army and his power.
9. Knight Robber is either (1-2) a folk hero who robs nobles and gives to the poor, (3-4) a bloodthirsty ruffian, or (5-6) a revolutionary working to destabilize the region for the gain of another political entity. Peasants and other low-born denizens of his domain are fiercely loyal to this knight either out of love, fear, or promises of a move up the social ladder and an improvement in the standard of living. They will hide the knight, lie about his whereabouts and generally protect him.
10. Bedeviled Knight was cursed by a witch to turn into a mindless monster (1. mongrelman, 2. eywing, 3. feyr, 4. troll, 5. hook horror, 6. wight) if he ever removed his armor. Half of his lieutenants share this affliction. He seeks a cure for this condition with grim determination and regularly pays small fortunes to various magicians and charlatans brought from faraway lands. To be able to afford this, he imposed unusually high tolls on rivers and roads passing through his territory. At night he and his soldiers rob merchants and other travelers — seizing their money and cargo, sometimes even kidnapping minor nobles for ransom. Unbeknownst to the knight, the only way to lift the curse is for him to forswear the tower and simply leave it behind.

Each lieutenant is two levels below his baron (but no lower than 2nd level) and commands a unit of 10 soldiers (unless stated otherwise in the table below), who are 2 levels below the lieutenant (but not less than 1st level, obviously).


Selk'nam male initiation ceremonies, the passage to adulthood, were called Hain. Young males were called to a dark hut. There they would be attacked by "spirits", who were people dressed as supernatural beings. The children were taught to believe in and fear these spirits at childhood and were threatened by them in case they misbehaved. Their task in this rite of passage was to unmask the spirits; when the boys saw that the spirits were human, they were told a story of world creation related to the sun and moon. In a related story, they were told that in the past women used to be disguised as spirits to control men. When the men discovered the masquerade, they, in turn, would threaten women as spirits. According to the men, the women never learned that the masked males were not truly spirits, but the males found out at the initiation rite. 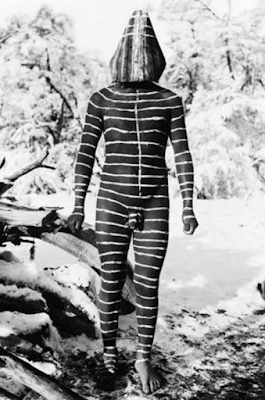 Before the European encounter, the various rites of the Hain lasted a very long time, perhaps even a year on occasion. It would end with the last fight against the "worst" spirit. Usually, Hains were started when there was enough food (for example a whale was washed onto the coast), a time when all the Selk'nam from all the bands used to gather at one place, in male and female camps. "Spirits" sometimes went to female encampments to scare them, as well as moving around and acting out in ways that related to their characters. 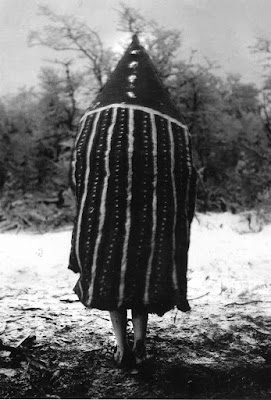 The last Hain was held in one of the missions in the early 20th century and was photographed by missionary Martin Gusinde. It was a shorter and smaller ceremony than they used to hold. The photos show the "spirit" costumes they created and wore.
Posted by Luke K at July 30, 2019 2 comments:

Whenever my players find treasure and I feel it should be at least a little bit interesting, but I didn't have anything specific prepared, I roll on this table. I generally keep it on my dm screen and cross out entries they already rolled. During downtime, I replace the crossed-out items with other wacky ideas. Stuff ranges from mundane items, which players can still use in creative ways, to completely bonkers shit, which can potentially be plot hooks galore or even powerful magic items. I didn't include concrete values, because it will vary system to system, setting to setting, merchant to merchant. Some of this crap is worthless, some of it priceless.

Random extraplanar entity emerges from a portal, attacks the target and jumps into another exit portal – in one fluid motion.

roll d12
1 • Portal of Steel • a masterless Saint of Blades delivers a +5 cut for 3d6+3 damage with his great sabre, save negates, triple damage on a crit 2 • Portal of Law • a Justiciar of the 11th Tower of Elim – using the knowledge of the target’s True Name – banishes the target to another Plane 3 • Cat Portal • Sabre-Tooth Duelist claws (+8 for 2d6) and bites (+8 for 2d8) the target 4 • Timeless Portal • a Twice Murdered King throws a diamond dust storm at the target dealing 4d4 damage and blinding it for d6 turns, this attack leaves 2d12 x 10 gp worth of diamond dust in the vicinity of the target 5 • Mycoworld Portal • bioluminescent spores land on the target making it easier to hit (roll twice and use a better result), the spores have a 1 in 6 chance of overloading the target’s brain and temporarily giving it a +2 bonus on attack & damage rolls and causing it to charge directly into combat with the nearest creature for d10 turns 6 • Prophesied Portal • a Burning Spoke of the Many-Eyed Wheel turns undead like a third level Cleric, target counts as undead 7 • Portal of the Envenomed • High Sting of the kim’Waa makes the target weep poison for d6 turns, giving it -6 penalty on all rolls, anyone in physical contact with the tears is also affected, save ends 8 • Gate to the Stars • the light of faraway stars gives the target a random insanity, save negates 9 • Portal to the Mutarealm • radiation from the portal makes the target swell grotesquely, doubling its height and multiplying its weight by 8, has a 2 in 6 chance of being permanent, otherwise lasts a minute 10 • Punch Dimension Portal • a disembodied fist punches the target in its solar plexus, suffocating it for d6 damage for 2d6 turns, save negates 11 • Portal of Khag Æsar • creates a 30’ sphere of magical darkness and silence for 2d6 turns, temperature drops to -20°C for the duration 12 • roll twice and use both results, cumulative
Posted by Luke K at June 29, 2019 No comments:

Map of the Twins

Made with Medieval Fantasy City Generator by watabou and touched up in Photoshop a little bit.

When I posted this map on G+ about a year ago, the Twins were a prosperous metropolis, but as of right now, the city is torn by a brutal civil war.
Posted by Luke K at June 05, 2019 1 comment:

Potentially D&D-able. This is a visualization of an early medieval palatium/palace/Pfalz of Mieszko I (10th century ruler of Poland) located on Lednica Holm. Just found it on Polish Press Agency page, accompanying news about new archaeological excavations planned in the area. Such a building would typically contain a throne room, the ruler's chambers and a castle chapel. Not really what comes to mind when you think "palace", but quite common in early medieval period.
Posted by Luke K at May 28, 2019 2 comments: 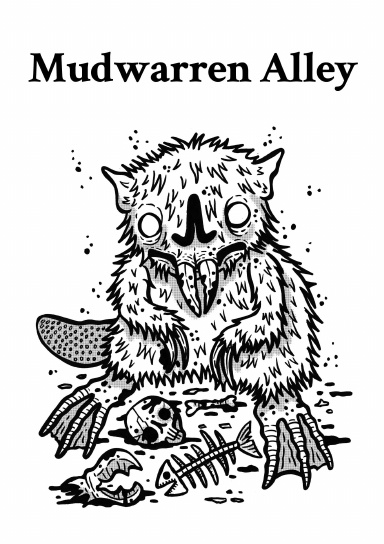 It's an awesome dungeon. I helped make it. A little bit.

I steal stuff from here: